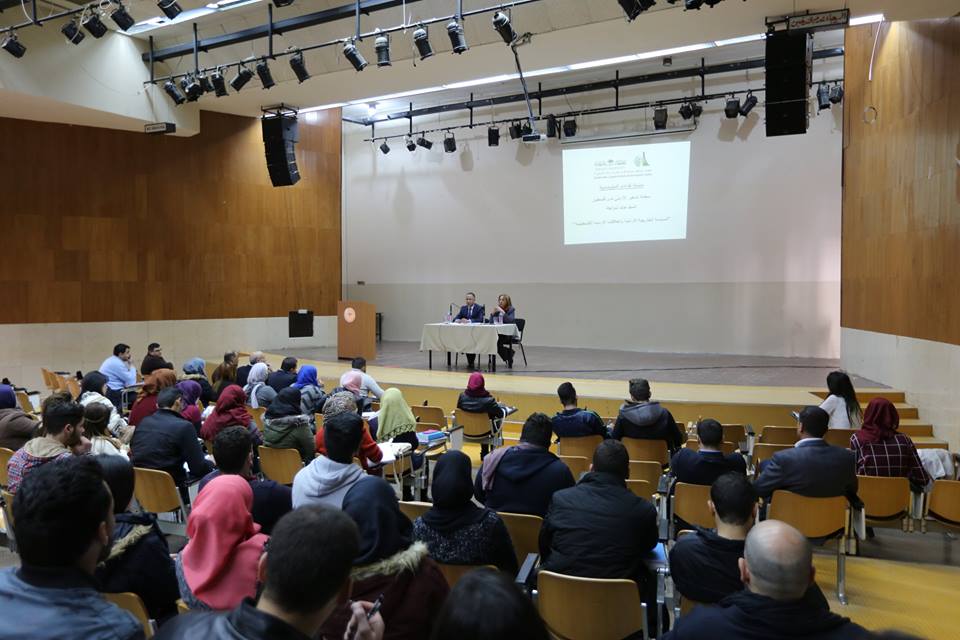 As part of its Diplomacy Meetings, Ibrahim Abu-Lughod Institute of International Studies, in cooperation with the Political Science Department, hosted the Jordanian Representative to Palestine Mr. Khalid Al-Shawbkah on Thursday, February 23, 2017, and organized a lecture on the Jordanian foreign policy and the Jordanian – Palestinian relations.

In his lecture, Representative Shawbkah stated that the Palestinian Cause is a top priority for the Jordanian Government. “Jordan is keen to find a just solution. We believe that Jordan is a key supporter for Palestinians, and we are doing everything we can to defend their fundamental rights in the international organizations.”

“If the occupation lasted longer, the region will be going towards more extremism and terrorism. A peaceful solution is a must”, Shawbkah added.

The Jordanian Representative talked about the obstacles that are challenging the Jordanian- Palestinian ties, especially in trade exchage. “Despite the constant encouragements the Jordanian Government offers to investors and businessmen, the trade exchange between Jordan and Palestine is $120 million. Meanwhile, the trade between Palestine and Israel has exceeded the $4.5 billion, because Israel has left no other choice but to export from their occupiers.”

Shawbkah pointed that convening the Arab summit in Amman on March 29 wouldn’t be an ordinary event. “Nowadays are not the best times for the region. The Arab countries, after the uprisings break out in 2010, became a battleground for global powers to reconfigure and strengthen their grip to the Arab world resources and wealth.”

“Through this summit”, Shawbkah continued, “We are looking for concrete solutions for the causes that are causing instability and bloodshed in the Arab region.”

The lecture was followed by discussion with the students, where they raised questions about the Jordanian – Palestinian and Jordanian – Israeli economic relations and the role of Jordan in protecting the religious heritage buildings in Jerusalem.

Representative Shawbkah visited earlier on the same day the University President Abdellatif Abuhijleh, and looked into prospects of cooperation. The meeting was attended by the Director of Ibrahim Abu Lughod Institute of International Studies Lord Habash, and the Dean of Student Affairs Mohammad Al Ahmad.